5 best communities in the West, Castle Rock named as a Runner Up

Sunset Magazine searched the West for towns, cities, and neighborhoods that are easy to love. All the winners boast a strong sense of community—the gift of making you feel like you belong.
View entire article here.

Best suburb: Runners-up
Campbell, CA. This San Jose suburb has long been overshadowed by its immediate neighbors, wealthy Los Gatos and Saratoga as well as Apple-HQ Cupertino. Now it’s coming into its own, with a newly vibrant downtown and the soon-to-be-revamped Pruneyard shopping center. Housing prices, while insane anywhere else, are almost reasonable for Silicon Valley. Population: 40,584. Median home price: $908,000.

Castle Rock, CO. Known for its good schools, this former quarry town about 20 miles from the Denver Tech Center has seen its population swell 65 percent since 2000, but Castle Rock has negotiated its growth better than many burbs have. New commercial areas have sprung up, but not at the expense of the original downtown, which is thriving. The rec department is in the process of expanding the city’s municipal trails system (with now more than 40 miles of paved trails) to link neighborhoods and tie in with regional and county trails. Population: 55,747. Median home price: $396,700.

Gilbert, AZ Phoenix is known for its sprawling cookie-cutter suburbs that sprang up in the housing boom and promptly collapsed. Gilbert has seen its share of booms and busts, but it is also anchored by its Heritage District—a turn-of-the-19th-century neighborhood that is luring new restaurants and food trucks and is the focus of a city redevelopment project. Gilbert is also the home of Agritopia, a planned community designed to bring a rural, farming-based lifestyle to the suburbs. Population: 239,277. Median home price: $277,100. 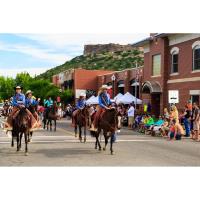