Castle Rock is a top Town

The numbers, facts, research and databases help tell the story residents live every day - Castle Rock is a great place to be. In fact, our Town ranks among the best both locally and nationally, according to a variety of national publications and studies.
Money Magazine: Top Place to Live
Money magazine recognized Castle Rock in its top places to live in 2011, 2012 and 2014. Most recently, Castle Rock ranked in the Top 10, coming in at No. 4.

Narrowing the list is difficult, of course, and Money Magazine set out to reduce the list to 10 from more than 780 cities with a population between 50,000 and 300,000 people. The magazine studied more than 50 factors, including the local economy, housing market, schools and healthcare.

The report analyzed 1,268 small U.S. cities with populations between 25,000 and 100,000 and ranked them based on 30 indicators, such as economic health, quality of life, education and health, safety and affordability.

NerdWallet: Top Place for Jobs, Families
Castle Rock was the top place in Colorado for job seekers in 2013, according to the website, which has been featured in the New York Times, TIME magazine and other national publications since its launch in 2010.

The site highlighted Castle Rock's 10.7 percent increase in the working-age population between 2009 and 2011. Also in 2013, NerdWallet named Castle Rock the fifth best place in Colorado for young families. The study looked at cost of living, education system and economic growth.

SafeHome.org: Safe City Ranking
In late 2017, SafeHome.org listed the safest cities in each state. Castle Rock ranked No. 5 in Colorado.

​WalletHub: Best Place to raise a Family in Colorado
Castle Rock is a top place in Colorado to raise a family, according to this ranking, published in summer 2017. The Town came in at No. 8.

WalletHub: Small City Ranking
Even though Castle Rock is growing, it is still considered small by some analysts, including those at WalletHub, who in 2016 named Castle Rock one of the Best Small Cities in America. 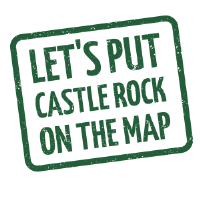